Coming off a solid effort yesterday, the Rowe Racing team was hoping to continue the great results in both of the two classes contested today, plus the one-off Trans-Tasman Challenge race. With packed grids and busy corners, Royce showed maturity beyond his years to smartly avoid traffic and slink his way to the front of the pack. Not only did close racing ensue, but his times continued to drop throughout the day. 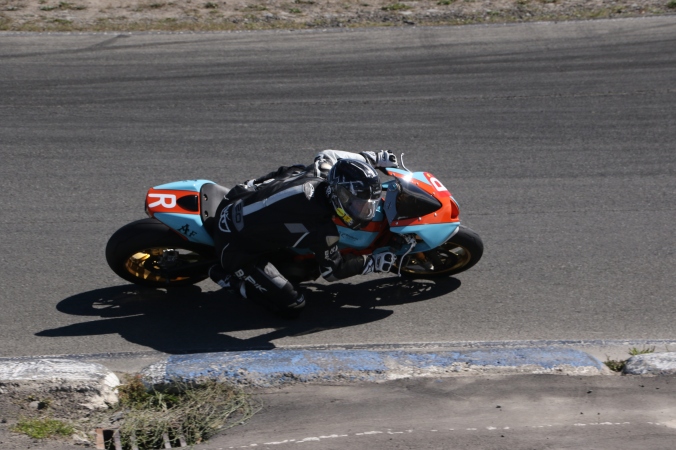 PIC: Not quite Phillip Island spec, but exciting all the same

Having both Royce and Howard aboard the same bike meant the machine was going to endure a lot of strain throughout the day. The team had rebuilt the clutch overnight and done everything possible to ensure it was as prepared for the demanding track. Sharing the bike resulted in some hectic work at the pit gate as Royce and Howard’s races were back to back, and saw the first rider come in from their race, leap off, the second rider jump on, while the team changed race numbers and transponders and topped up the tank as the next race went out. The team did a great job and it all went seamlessly. 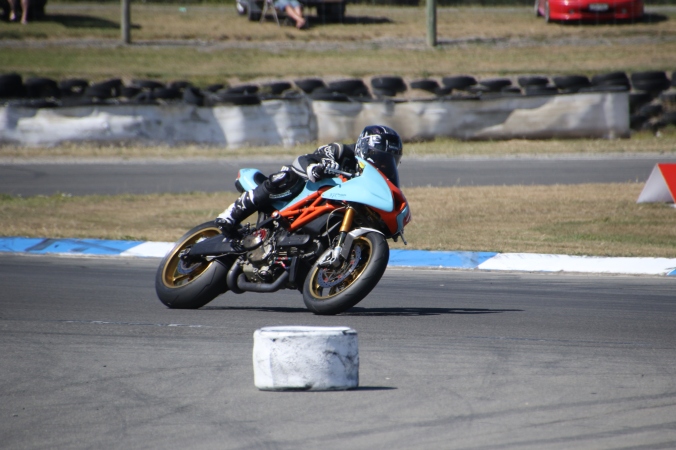 PIC: The bike held together well – a testament to the team

Utilising his confidence from the race win yesterday, Royce steered the BJR Ducati 696 to two race wins in the Superstock Limited class. Pulling a solid gap from the get-go, Royce thrived around the tight and technical circuit pushing for more and more corner speed aboard his lightweight machine – a familiar feeling to the 125GP bike he began his career on as a teenager. 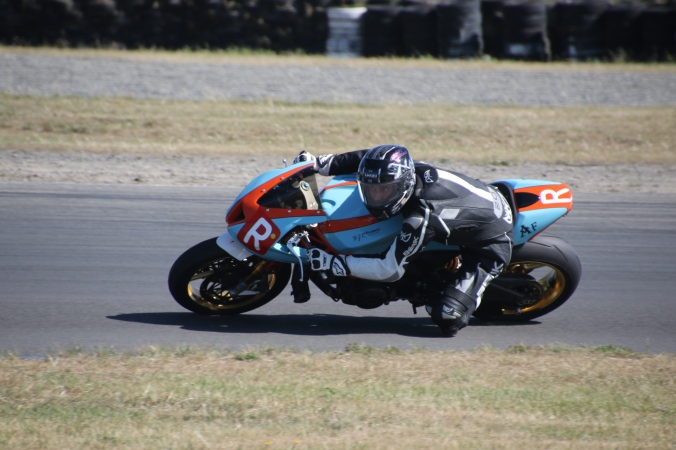 PIC: Eyes on the prize

In the F2 class, it was a similar scenario. Although having the second race red-flagged which subsequently ended the meeting, Royce managed to separate himself from the pack and take the first race win which was enough to take home the overall trophy.

PIC: Royce continued to drop his times throughout the weekend

There were entries from as far as the UK and USA but the main rivalry was between the Australians and New Zealanders. The feature race of the weekend was the Trans-Tasman Challenge involving ten Aussies versus ten Kiwis. The crowd were on their feet the moment the green light flashed and had everyone agreeing afterwards that it was the best race of the meeting. The field consisted completely of bikes between 1000 to 1200cc – except for Royce on the BJR Ducati 696. He started from second row of the grid and then spent the five laps dicing with the leader who was on a 1098 Ducati. The lead swapped several times with Royce passing the Kiwi through the twisty sections and the 1098 pulling away down the straights of the 3.5km circuit. The two bikes entered the final straight to the finish line side-by-side, but the 1098 had the legs to the line and Royce finished 2nd by less than a second. The Kiwis ended up winning the trophy with more points from the race than the Aussies.

PIC: Royce dicing for 1st in the Trans-Tasman Challenge

Obviously ecstatic about securing such solid results for his first time on the Island, Royce said, “After a good day yesterday I was keen to keep the lap times coming down. Turning heads with times that not even the locals could keep up with, the team and I were stoked with our results. Some prize money presented has recently resulted in beer money all round. The fush and chups over here have been bonza and all the Kiwis have been more then welcoming. I’m overly happy with the weekend’s results and I can’t wait until my next outing on the bike.”

We were lucky enough to have an expat Pom invite us to share his garage for the weekend. His name was Guy Lowe and he had raced at the TT on six occasions as a sidecar passenger. His pet parrot ‘Reg’ was a popular garage manager for the weekend.

PIC: Howie, Guy and Royce posing for a photo with team manager Reg… the parrot

We would like to thank Hamish Cooper for arranging our entry and helping in the pits, Glen Hand for snapping some great photos over the weekend, Eddy Garner for putting in an enormous effort in getting everything sorted in Australia and New Zealand, the NZ BEARS Club for putting on a spectacular meeting and the people of Christchurch for their warm and friendly welcome wherever we went. Christchurch is a beautiful city and well worth visiting. Now it’s time to celebrate in Middle Earth!

After a promising practice day, the Rowe Racing Team has hit the ground running in Christchurch with unprecedented success on Saturday at Ruapuna Park. With one qualifying session for each of Royce’s two contested classes this morning, limited time was utilised by the young racer, cementing pole position for both classes.

PIC: Royce off to a flying start

The Superstock Limited class, contested by 37 riders, was a crowded affair. The first two corners meant bumping elbows and fighting for space, with Royce managing to find his way to the front. After securing the lead, he never looked back, taking first place by a convincing distance.

It was a similar affair in the Formula 2 class, with Royce fighting his way past 40 other racers to lock in first place. The bike performed well throughout the busy day, but the team has still decided to rebuild the clutch overnight as a precaution.

It was an unexpectedly fruitful day for the team, with everybody stoked at how well bike and rider had performed. Royce had this to say, “Today the team had high spirits and a strong confidence in bringing something good to the table and we did just that. It was a hot day of racing (30°C) by the Kiwi’s standards. They were melting while the Aussies still had jumpers on! On a positive note, the track was nice and sticky. With some great starts today and a bit of maintenance to the clutch, I’m keen for some even better ones tomorrow. Getting my head around the track, the lap times just kept coming down. I’m keen to keep showing the Kiwis how us Aussies do it and I can’t wait to get back out there tomorrow.” 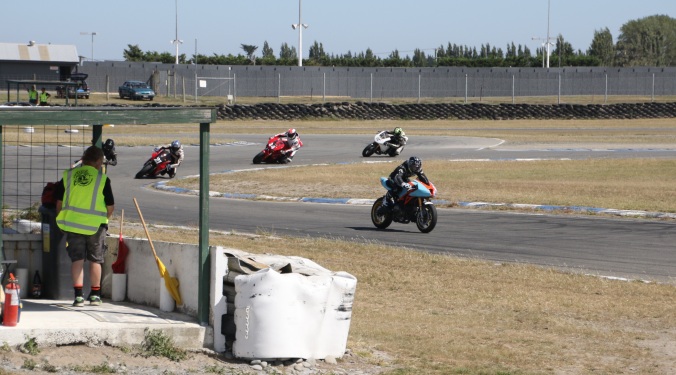 PIC: Royce on the way to another race win

The team has a further two races for each class tomorrow. Although the weather may be taking a turn for the worst, the team’s spirits are high and will be hoping to leave a lasting impression on the Land of the Long White Cloud.

The Rowe Racing team has landed safely in Christchurch, New Zealand, for the Sound of Thunder meeting held over the 27-28 February weekend. Being run at Ruapuna Park, the team spent much of yesterday at the track preparing the bikes for Friday practice.

After much anticipation, riders finally got a chance to hit the track today through what is called an ‘open gate’ practice, meaning all 200 entries are allowed out simultaneously. Although useful when making small mechanical tweaks then returning to the track instantly, it did make getting a clear lap near impossible.

PIC: Royce clocking in another practice lap across the line

The main objective of the practice day was to learn the track, being that this is Royce’s first time, as well as perfecting the gearing. Mental notes were taken and Royce definitely feels more confident around the tricky circuit, but the latter leaves a little to be desired with varying head-winds throwing diagnostics out. 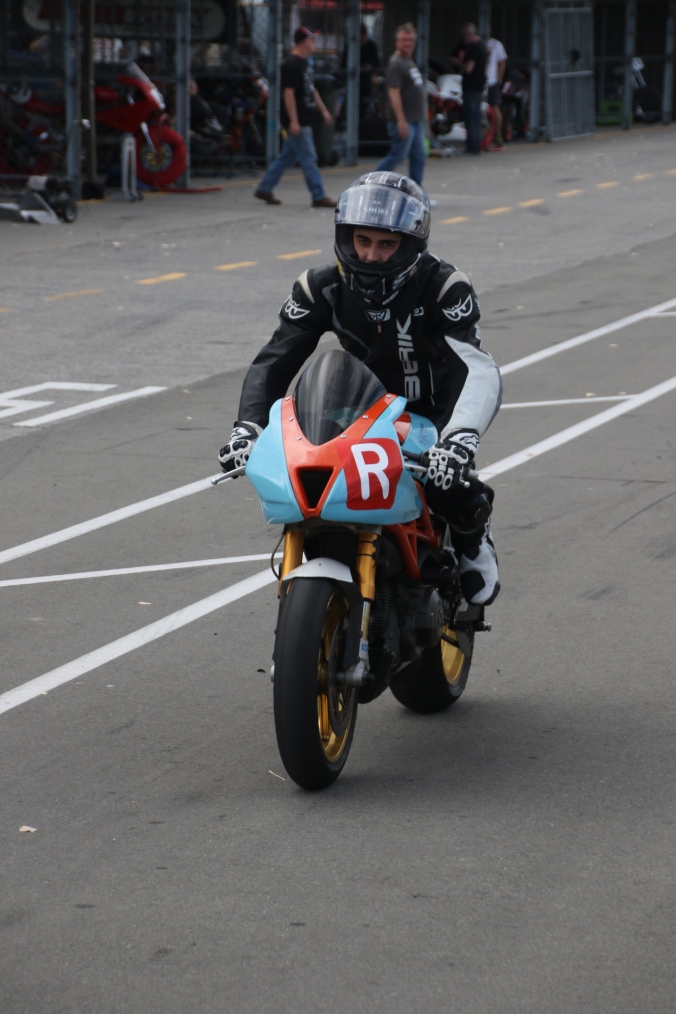 PIC: Heading out of pit lane after a slight tweak to the bike

Royce had this to say about the new experience, “Now in the land of the kiwis, the Ruapuna track has been bit of a tricky one to learn, but the team and I are figuring it out. It’s a lot of fun being on the nimble Ducati and I’m slowly getting faster around the 17 corners, all ranging from tight hairpins to carousel-like bends. I’m really looking forward to the racing tomorrow and Sunday and hopefully can do the Aussies proud.” 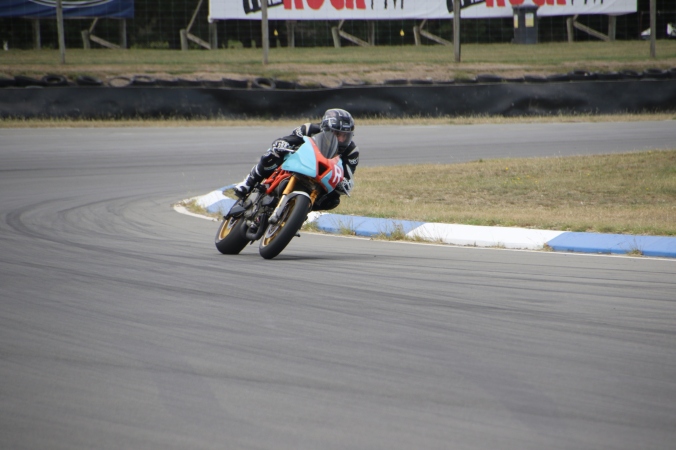 PIC: Learning the technical track has been difficult

Royce and teammate Howard ‘Rimmer’ Sabey still enjoyed some great dicing throughout the day, with both ending on identical lap times. With Howard’s larger BJR Ducati 1000 powering away down the straight, Royce was able to tag behind for a slip-stream on the lighter BJR Ducati 696, then gain the tagging lead inside the tight and technical corners. 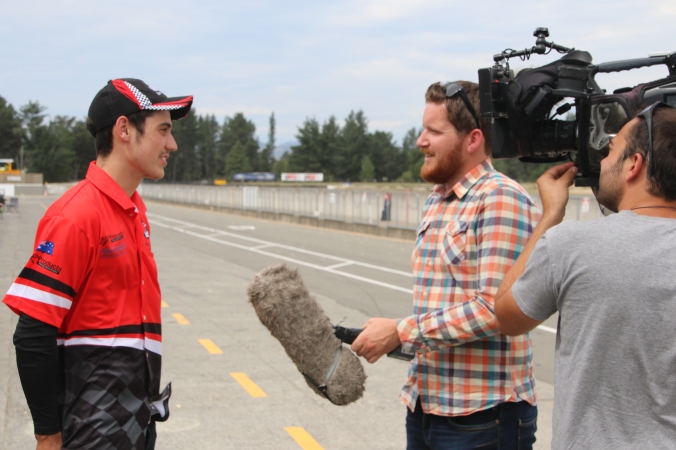 PIC: The team has already attracted some attention from the local media

Unfortunately, halfway through the day after finally beginning to feel comfortable, the BJR Ducati 1000 broke an exhaust valve (US supplied, not a BJR component) on the rear cylinder, putting the bike out of action for the weekend. This has obviously been a big disappointment for Howard and the team after travelling so far. Royce had been accepted for three classes on the BJR Ducati 696, but has decided to share his bike for the weekend, giving up one of the classes to allow team-mate Howard an opportunity to ride. This not only lets Howard get some riding in over the weekend, but allows Royce a break between an overly busy schedule of races.

PIC: The boys and bike cooling off

The team has attracted a lot of attention already, with the printed programme featuring a two-page spread on our Isle of Man experience. Also wanting a piece of the Aussie contingent was local TV station Christchurch TV who was at the track to conduct an interview with Royce, appearing on their nightly news tonight. Check our Facebook page for a look at how it went down.

Check back tomorrow night for a full rundown on the team’s results after the first day of racing!