After working hard to build strength back up in his injured body, Royce has been transferred from the Critical Care Unit to the Major Trauma Ward at Aintree, and is making good progress.

Whilst recovering, he will remain in the UK. Due to some of the procedures undertaken after the incident, there’s a certain recovery time that must be adhered to before being allowed to fly, so he’ll be staying put until at least mid-December. By that stage he should be much fitter and have an easier journey home. 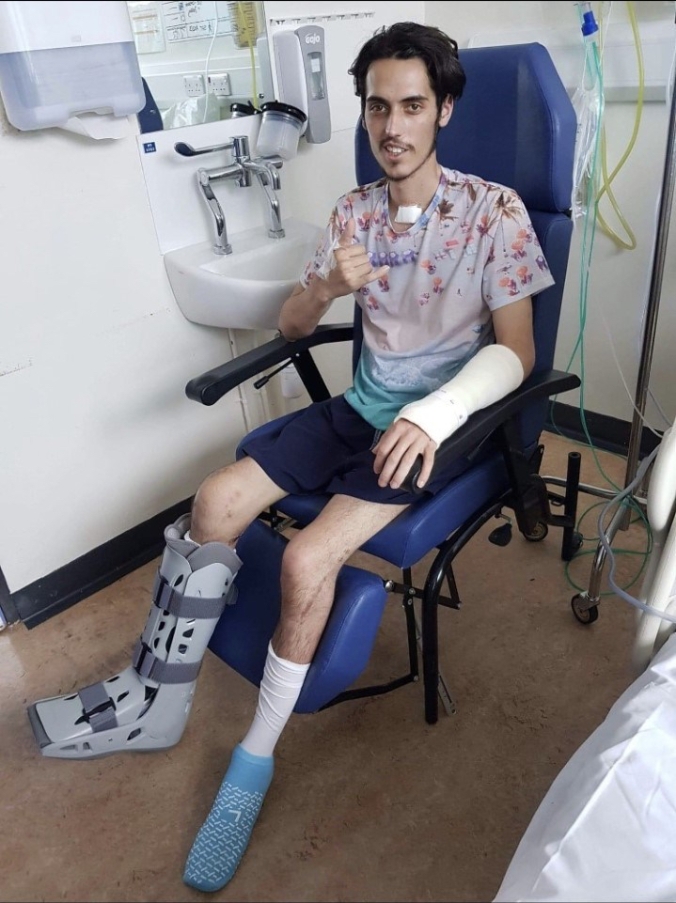 PIC: Royce with his latest accessory at Aintree Hospital

The support from the racing community in the Isle of Man and the UK has been overwhelming, with many people contacting and visiting Royce.

PIC: Just some of the Manx GP marshalls who were at Alpine corner to assist Royce at the time of the incident. We thank all of them (some not pictured) who went above and beyond for us during the difficult time immediately after the crash and subsequent days following.

Mum, Debbie and partner, Beth have been residing at the hospital accommodation since the incident, and have had many people take them out for shopping or lunch breaks. People from home have also been sending their best wishes and providing support, which is greatly appreciated.

We’d especially like to mention Ali Hay, who has made a number of long trips from Cumbria to Liverpool with supplies. Wyn Evans and Will Kneen have also given up much of their time, and Island Express has gone out of their way to assist us. The Ducati Owners Club of South Australia and the Manx Grand Prix Supporters Club have also provided kind assistance throughout Royce’s recovery, which has been a massive help.

PIC: Royce and team member Simon Milazzo during practice week, who has been providing an enormous amount of support to us behind the scenes.

Since the incident, we’ve had the task of preparing the bike for shipping from the Isle of Man back to Australia. Ryan Cringle spent an entire day helping Les retrieve the Triumph after it had been impounded and then released. That job would have been impossible without his assistance and are profoundly grateful for Ryan taking the time out to help us. 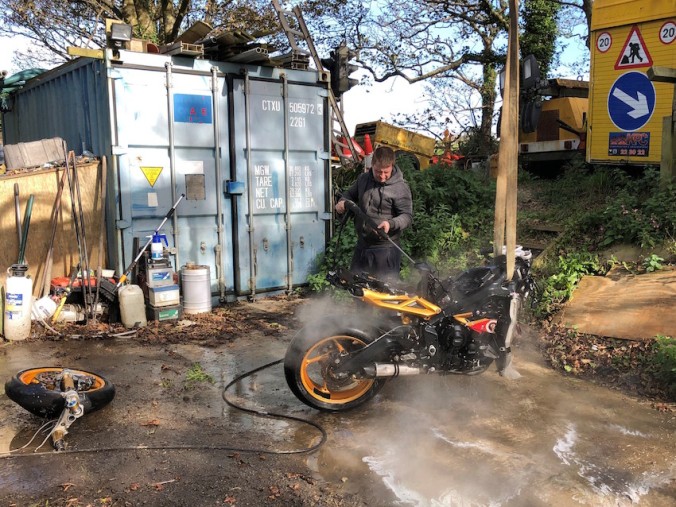 PIC: Ryan cleaning off about half a ton of the best Manx soil and several litres of oil from the bike before shipping.

We’re also very grateful to the staff at Aintree Hospital who have provided outstanding care which is regarded as world’s best practice. We understand racing is a dangerous sport and are lucky to have Royce still with us – many doctors have had a hand in his recovery, but the initial protection came from the quality of his gear. Nothing could have prevented the injuries totally, but we recognise the quality of Furygan leathers and Shoei helmets which proved to be outstanding.

PIC: Royce and Rosie the aid dog hanging out

Now awake and conversing huskily as his lungs repair slowly, Royce had this to say while sipping on his blended full-English breakfast smoothie, “Slowly but surely I’m making progress. My lungs have increased in size a little. Coughing fits have subsided, with only a little phlegm coming up from the infection which we have seemed to beat.

“The displaced rib of my broken ribs can cause me a little grief when on my back but seems to have healed well. I can say I’m a proper biker now having broken my first collar bone! It has healed well with a nice bend so you clearly see it was broken as proof!

“My legs are slowly getting stronger with the right in a moon-boot and the left femur being able to weight bare. Physios are getting me to walk a bit very slowly using a pull pit machine.

“My scaphoid is still in a cast, probably for another week or so. I had a hearing test because when I woke from ICU my hearing was gone in the right ear. The test confirmed that the impact my head had in the crash damaged my inner ear which is unfortunately permanent. When we get back to Oz, hearing aids seem to be the way to go… or a large megaphone.

“Apart from that I’m tip top! The hospital plans to get me on a vigorous rehab program very soon, so that should get me up and about a lot more.”

Once again, the team would like to thank every single person who has gone out of their way to help or just check-in on Royce and the family. We’ll provide further updates as Royce continues to improve.