Royce Rowe began his motorcycling life on dirt, finding his bearings on a Suzuki JR80 at a large open property in the Riverland. It didn’t take long for him to make the inevitable switch to tarmac at the age of 13, entering racing in the junior class on board a Honda CBR150. Royce gained experience at numerous tracks around the country before reaching the junior competitions age limit.

Sticking with the smaller capacity bikes, Royce then moved on to a Honda 125 GP bike, competing in the 125cc class in South Australia. After acquiring valuable skills in corner speed and close racing, Royce graduated to a 600cc machine. This would shape the last of his teenage years, eventually honing his skills to take the South Australian Road Race Series 600cc title at the tender age of 18.

Royce’s obvious talent and dedication didn’t go unnoticed, with BJR Products owner Brian Rosser enquiring about taking Royce on as a potential rider for one of his Ducati’s.

The partnership was a success from the word ‘go’, with Royce taking to the Ducati excellently. On board the 696cc Ducati the team has scored race wins interstate at BEARS meetings, while at home this year they wrapped up their fourth South Australian Championship win in the Pro Thunder class.

All of this success has accumulated into Royce attempting a life-long goal of racing at the Isle of Man. With Brian always up for a challenge, construction of the custom Ducati began over 24 months ago. Royce’s father Les competed at the Isle of Man TT in 1989, making the infamous race a family obsession ever since. The videos watched in awe as a child by Royce have now become training tapes for his biggest test to date. 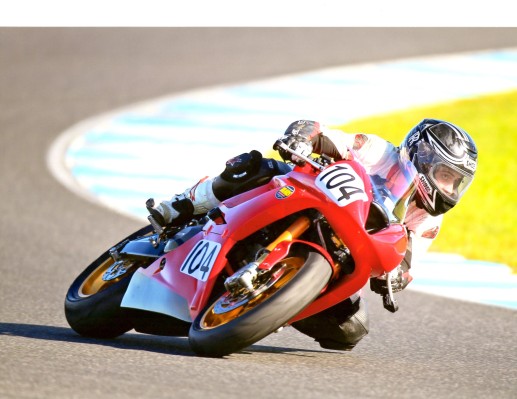 With a number of custom builds under his belt, Brian Rosser of BJR Products has put together a very specifically modified Ducati to make the Isle of Man (IOM) trip. Competing in the Super Twins class at the Manx GP, the bespoke Ducati 650, adapted from a Monster 659, has to be kept under strict guidelines to ensure scrutineering is passed.

A lot of parts have come from the 696cc and 800cc version ridden by Royce and campaigned in national events. First, to even get the ball rolling, capacity had to be capped at 650cc. Furthermore, the 696cc revved to 11,000rpm strongly and 12500rpm when required – the IOM is a different race, so this number needed to be stretched out.

This meant constructing a new locking system for the valve shims, while also altering the timing and producing new cam profiles. The heads are designed for maximum flow, so improving the ports and machining new valves and guides was the answer. For the motor to be viable at the IOM, it basically needs to run full-bore for an hour – a big ask for any motor, with many not standing up to the challenge each year.

So, why a Ducati Monster? It’s all about understanding the motor and frame geometry, so in turn we start with good basics. Why start with a Ferrari when you can take a stock model learner legal bike and make it stupidly fast? That makes heads turn. Brian has a wealth of knowledge from a lifetime spent around machines and motorcycles in particular. Every aspect of the bike has been designed and altered to wring every last little bit of performance out of it.

This isn’t always the easiest task when situated in Adelaide, with Australia limited in engineering opportunities. To jump these hurdles, Brian develops most parts using 3D CAD (a computer program) and then works with local and overseas manufacturers to produce the tailored items that could not be made in his own workshop. There is no CNC cam grinder available in Australia, so the unique cam grinding techniques required are developed in conjunction with JSM Engineering, a local company. Parts still can take weeks, sometimes months, to develop and eventually be fitted and tested. Having recently been unveiled at Phillip Island, the suitably red Ducati 650 is the final product of years’ worth of research and development by Brian, having a number of previous bikes culminate into this hopefully very successful machine.