Rowe Racing attended the first round of the South Australian Road Race Championships at the weekend in hot conditions. With a solid break over summer, rider Royce Rowe was keen to get back into race-mode on his home track, Mallala. 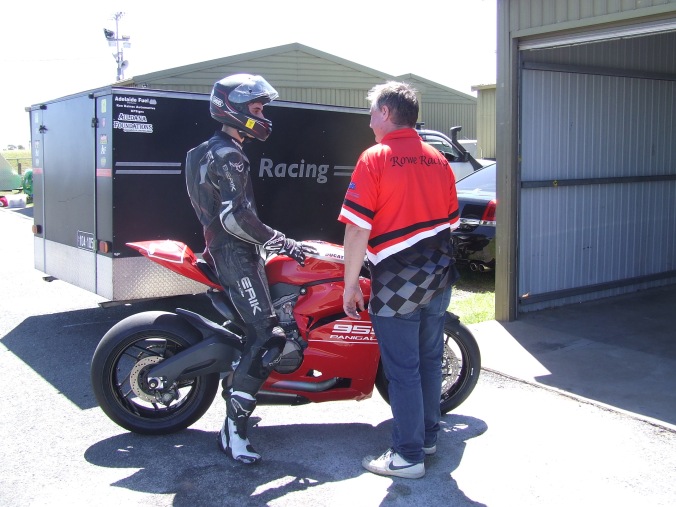 PIC: Royce got the chance to test a 959 Ducati Panigale over the summer break

Having come off a dominant 2016, the team entered the Super Twin Championship once again. Participating on the 696 Ducati, Royce took all three race wins.

PIC: Getting to grips with the new machinery

Heading into 2017, the team have considered some big changes in machinery. To begin with, in February the team tested a 959 Panigale which was generously lent to us by Ciaren Carruthers. He was happy for us to test and evaluate the bike which Royce found very impressive.

PIC: The team were kept busy making changes all weekend

The team has also been toying with the idea of swapping to Triumph for this year’s Supersport and Manx Grand Prix assault. It was a difficult choice as Royce has been riding a 600 Suzuki for the last five years and they have been superb bikes, always reliable and they have provided us with a number of SA Supersport Championships – not to mention 6th in last year’s Senior Manx GP.

Once certain, the team committed to buying a stunning Triumph Daytona from Anthony Villella in Cairns, North Queensland. He had it beautifully prepared and the only work we had to do was set up the suspension for Royce’s weight and riding style.

The team decided to enter the new Triumph in the Supersport class over the weekend. It was Royce’s first outing on the bike. This saw constant changes over the weekend with variations to springs, compression, rebound settings, fork heights and so on. Royce had to get familiar with the bike for the first time and assess a different suspension set-up for every practice session, qualifying session and race. With all that in mind, he adapted amazingly well and from three races secured the three wins. Not only that, Royce got to within 0.2 seconds of his personal best lap time set on the Suzuki.

PIC: Royce taking the lead during one of the weekend’s Supersport races

The team has now decided to switch from Suzuki to Triumph for the Manx Grand Prix. We will be keeping the Suzuki at the moment as a spare bike until we have the Triumph sorted.

Development will continue between now and the next race meeting at Mount Gambier over Easter. That will include a round of the national BEARS meeting. We will be in the Isle of Man for round two of the South Australian Championships, so unfortunately won’t be able to defend our 2016 titles this year.

As a reminder to our fans, tickets are still on sale for the Rider Development Lottery. There are some great prizes up for grabs, so get in quick!