It’s been a long road for Royce and Mother, Debbie since the accident over two months ago, but the green light for Royce to fly home has finally been given. The pair will fly back to Australia in mid-November where Royce will continue his recovery.

Royce has been attending sessions with a private physio over the past fortnight. Cath Davis, of Rex Physio, has treated many top riders in the past, including TT front-runner, Connor Cummins. Within the first five minutes of working on Royce’s foot, she diagnosed the discomfort he has been having all along as Complex Regional Pain Syndrome (CRPS).

PIC: Royce undergoing ultrasound treatment, which is ticklish and painful, but will help the recovering nerves

CRPS is a chronic pain condition that most often affects one limb usually after an injury. It is believed to be caused by damage to, or malfunction of, the peripheral and central nervous systems. Treatment aims to restore movement and function of the affected limb, with most people recovering from the condition in time.

One of the conditions to fly is that Royce can bear weight on at least one leg, which Cath is confident she can help him achieve. Royce is focused on reaching that goal and we all can’t thank Cath enough for the amazing work she has done. He might not be skipping down the plane’s aisle, but as long as he can hobble to the toilet, the stewardesses will be happy.

PIC: It hasn’t been all doom and gloom – Royce and Deb enjoyed a drink recently with good friends the Kneens at the Barbary Coast Bar

The next couple of weeks will include as much rehab as possible to get Royce as best prepared for the flight home.  The team will provide updates as his condition hopefully improves. With all things going to plan, photos will start looking brighter as he arrives back in time for an Aussie summer.

Slowly but surely, Royce’s situation is beginning to improve thanks to a dedicated exercise regime and plenty of rest.  He begins the first round of intense physio this week, hopefully providing rapid improvement.

Now well and truly settled in the Joey Dunlop Foundation House, Royce and his Mum, Debbie are keeping busy with visits to the physio, chemist and the occasional catch-up with friends when the weather permits. Royce’s new wheelchair is working a treat, allowing him easier access to slide in and out of bed, then back into the chair, plus the opportunity to wheel himself outside in the sun. 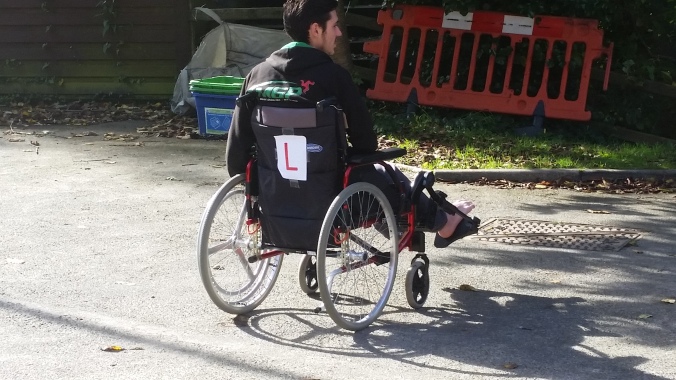 PIC: Back to the L-plates for Royce!

To aid the healing process, Royce has also begun treatment in a hyperbaric chamber. Although there’s no scientific evidence of results, many top TT riders swear by the treatment which supposedly enhances the body’s natural healing process. The walk-in chamber increases atmospheric pressure, making it seem as though you’re metres under water.

PIC: Just like Back to the Future, Royce keeps trying to dial the exact coordinates into the hyperbaric chamber to return him one minute before the crash… no luck yet!

When quizzed on the latest injury updates, Royce said, “My left leg is bending well, now hitting 110 degrees, which is as far as the brace allows. The right leg is very close to hitting 90, which would be amazing.

“My wrist is doing great. I’m starting to do some light weight-bearing, with mobility coming along nicely.

“After seeing a doctor and having more X-rays completed, it turns out the femur was such a big break that it’s still a few weeks away from starting to weight-bear. The left tibia however is ready for partial weight-bear, which will hopefully get myself and mum on-board a flight in November.”

In other news, the Isle of Man was rocked by Hurricane Ophelia. It tore trees down and ripped roofs off buildings. All flights and ferries were cancelled, while Royce attempted to use the breeze to propel his wheelchair down the driveway. He and Debbie also attended the ‘Mhelliah’, a fundraiser auction held by the Manx Grand Prix Supporters Club in aid of the Manx Grand Prix rescue helicopters, injured riders and their families. Royce bought some clothes, wine and a naughty calendar. 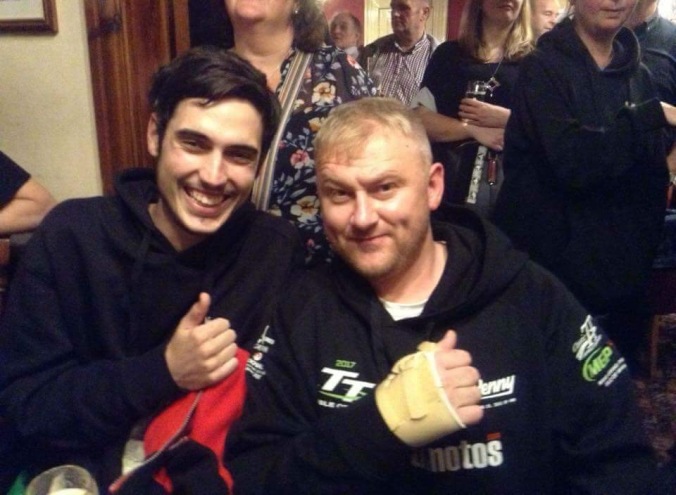