The Phoenix MCC Rider Development Lottery was held at the Velocette Clubrooms over the weekend. 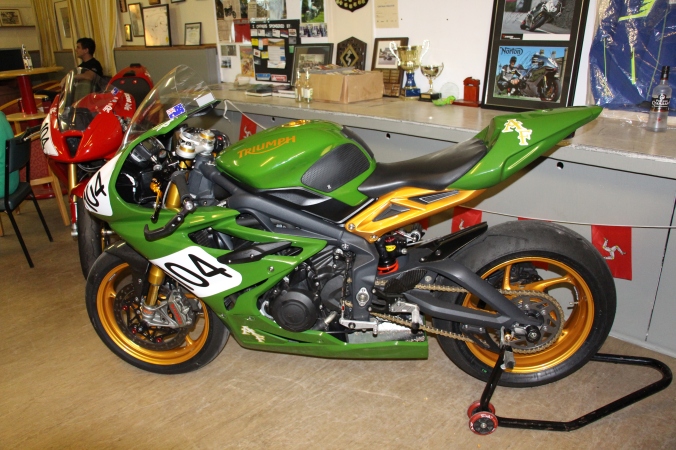 Pic: Both race bikes were on display for the night

Kicking off in the late afternoon, the crowd slowly arrived to an excited Rowe Racing team. Both the Isle of Man motorcycles were out on display for fans to check out and ask questions of the team principals.

The Velocette Club did a fantastic job of running the bar, which got a work out, and kindly gave us use of their BBQ, which was sizzling away all evening. 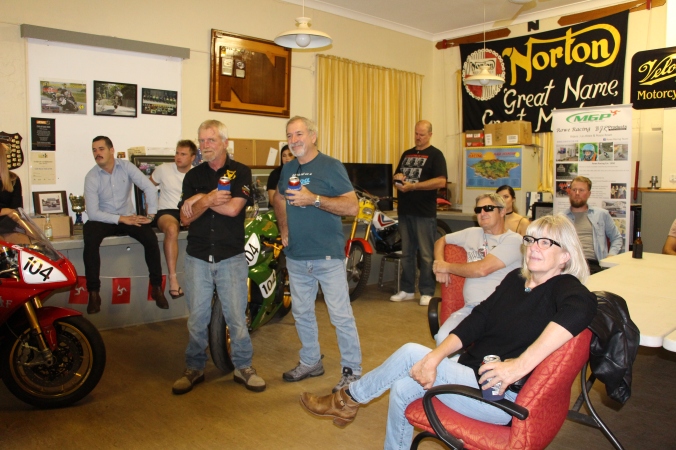 Pic: Many people enjoyed the presentation on the Isle of Man given by Royce

Royce wowed the crowd with a fantastic presentation about his assault on the Isle of Man, educating punters on the race and country in general. After a few party games to help donations tick over, it was time for the big draw! 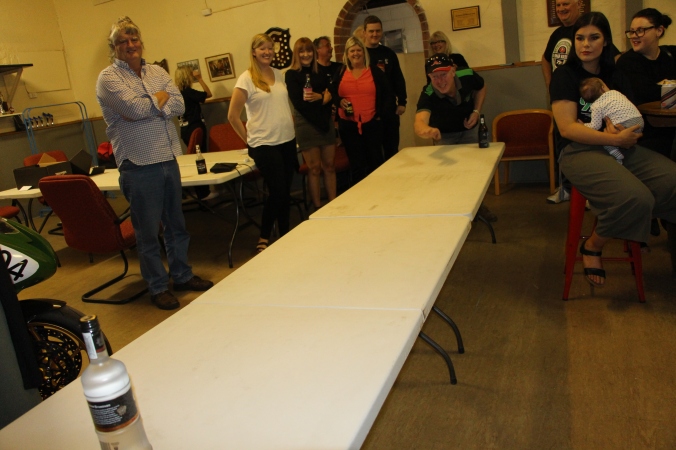 With our adjudicator on hand, Royce drew out the lucky winners. We can safely say all winners were absolutely stoked with their prizes! (1st prize – B Tucker, 2nd – A Malatesta, 3rd – J Kah and 4th – C Cheeseman). 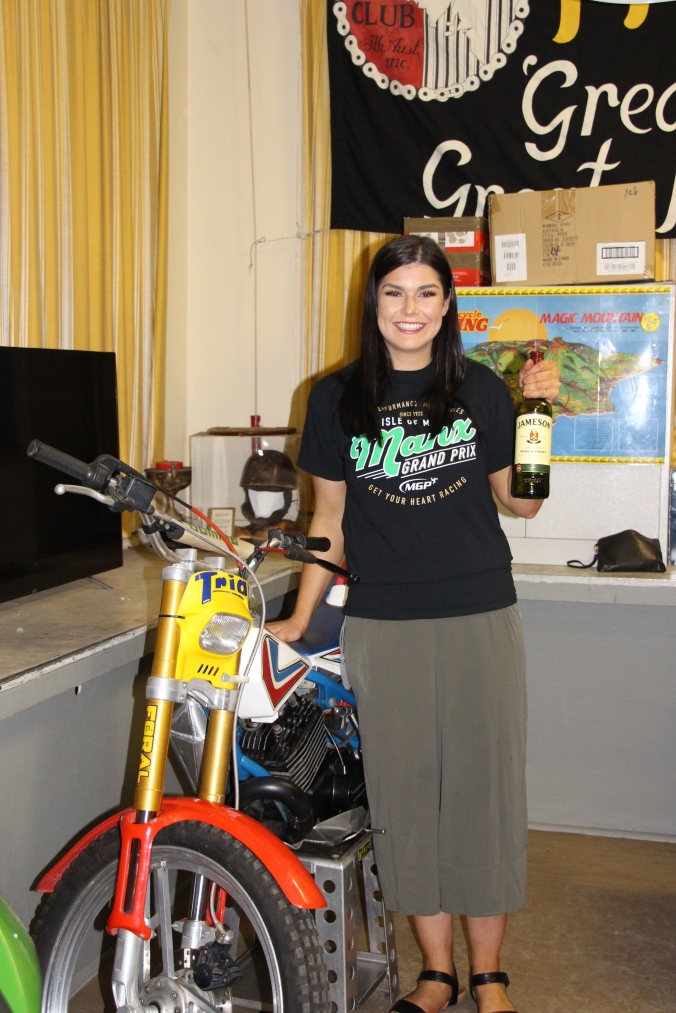 Pic: The lucky winner with her prizes – better get practicing!

Rowe Racing Team would like to thank every single person who bought a ticket in the raffle. Whether it was one or 21, it shows great support for our goal to reach the Manx GP and we now consider you part of the team.

It was straight back to business after the enjoyable night for the team who set off to Phillip Island for a test day on the Monday. Utilising the public holiday Tuesday, the 1800km round trip was almost for nothing as typically dreadful Melbourne weather greeted the team on the Island. 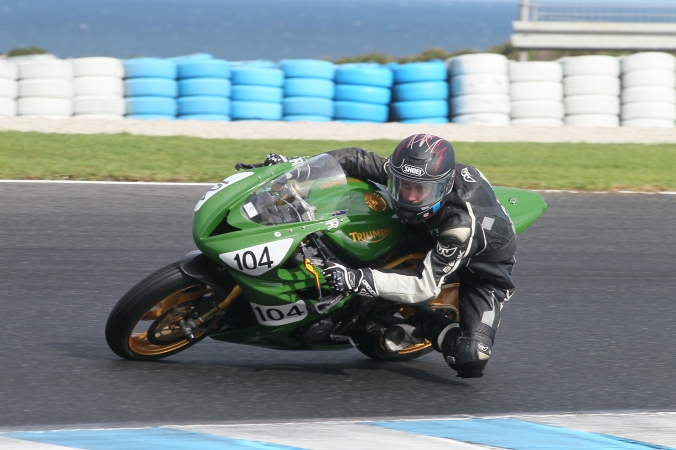 Pic: Once the weather fined up, some progress was made (Credit: SD Pics)

The first few sessions were abandoned due to torrential rain, but the team still made the most of the easing conditions throughout the afternoon.

The team managed to get some testing done, but were limited due to a slow drying track. Although restricted, signs were definitely positive for the team. We now look forward to another Phillip Island test in coming weeks with hopefully kinder weather!

The traditional Easter race meeting at Mount Gambier’s Mac Park has been a successful hunting ground for the Rowe Racing team over the years, none more so than the long weekend just past. 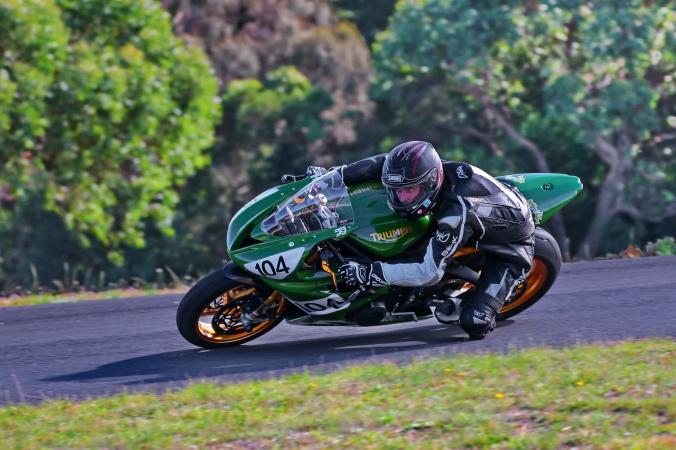 Run flawlessly by the Mount Gambier MCC, it was a real pleasure to ride at one of the best tracks in Australia with the whole event running seamlessly. Not only that, the weather was an absolute treat, providing riders every chance to better their lap times.

The meeting included a round of the BEARS (British, European and American Racing Series) national championship, and it was great to catch up with our friends from Queensland, New South Wales and Victoria. 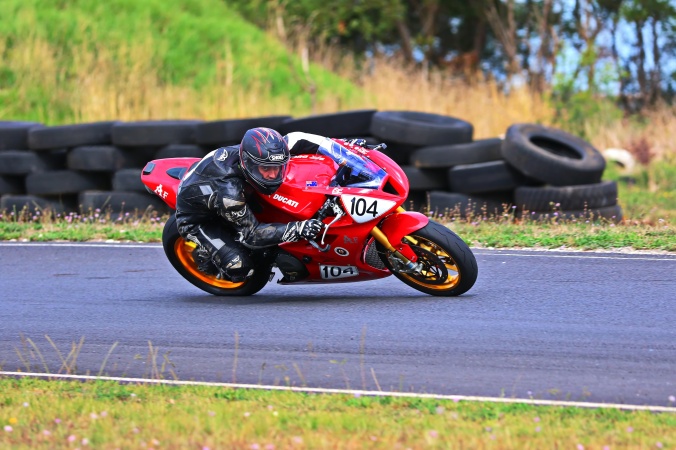 Pic: The Ducati was on song all weekend (Credit: Pierre Cazes)

This meant numerous back to back races on different bikes – a problem the team has become accustomed to. As usual, it was a matter of Royce coming into the pits, jumping off one bike and onto the other, telling him which race he was about to contest, and letting him do his thing.

The two bikes and rider performed well beyond our expectations.

With four classes, contesting four races in each, Royce had 16 starts for 16 wins. This was easily the most races he’d ever competed in over one weekend and showed why the physical endurance aspect of Royce’s riding is such a strong attribute. 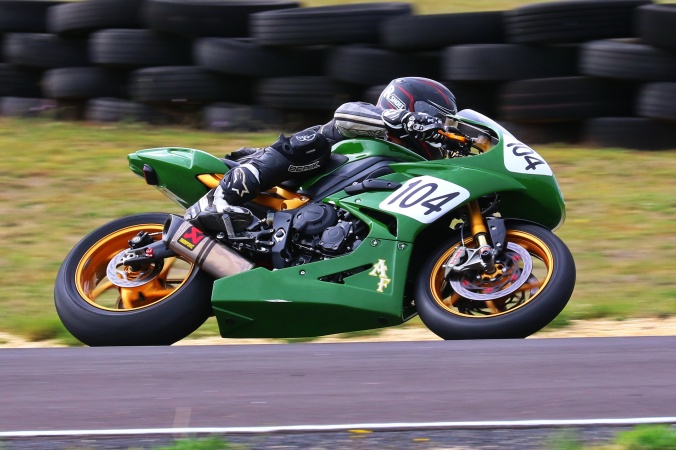 Adding to the success of the weekend was PB’s on both bikes and three new lap records. Two records came on the Ducati in the Super Twin class and BEARS Formula 3 respectively, and one new record in the BEARS Formula 2 aboard the Triumph.

Some of the best racing all weekend was witnessed in the combined F1/F2 races, which saw Royce on the 675 Triumph dicing with Ducati 1198’s, 999’s and an MV Augusta. With the crowd cheering, Royce managed to slice his way through the field on the nimble Triumph, beating the much bigger bikes.

The decision to swap manufacturers was a tough one, but after countless late nights modifying the Triumph, Royce’s times have now dropped below his previous set on the Suzuki. Not only is he settling in on the new bike well, the Ducati times were faster than previously set too, so all signs are positive leading up to the Manx GP.

Royce said, “I always enjoy the Easter cup. It’s great to see the BEARS members. This particular year couldn’t have gone better. After wins in every race we topped the weekend off with a few lap records, I was pretty chuffed to say the least!

“The Ducati was on song and felt great, allowing me to push hard. As for the Triumph, after every ride I’m feeling more and more comfortable on the torquey beast and I can’t wait for a day at Phillip Island next week to see what it’s really capable of!” 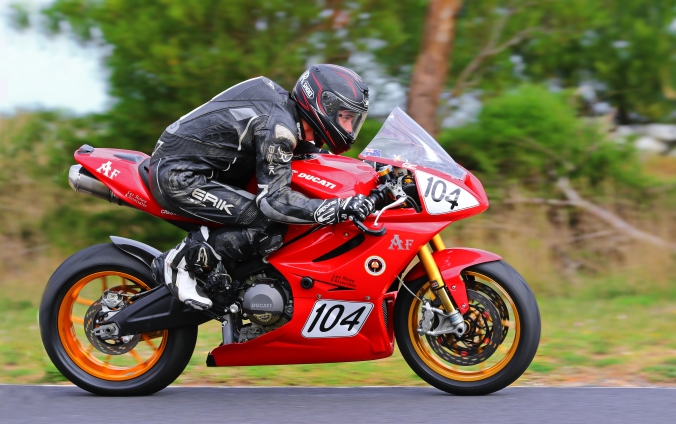 Team engineer, Brian Rosser of BJR Racing, believes there is even more to be extracted from the Ducati two-valve twin, and we have two ride days scheduled at Phillip Island on ANZAC Day and Mother’s Day in the next five weeks to test these developments.

On the Manx GP front, our entries have been accepted for the Lightweight, Junior and Senior Manx Grand Prix events, so preparations are proceeding at an alarming rate. We thought we had plenty of time, but we will be crating up in about 10 weeks from now, so things are going to be hectic.

What seemed like plenty of time has now flown by, leaving the team about 10 weeks until the bikes are locked in their crates – so things are going to be hectic!

Hopefully everybody has bought up plenty of raffle tickets as the Phoenix MCC Rider Development Lottery is set to be drawn this Saturday, 22 April, at 5pm. The day will begin at 3pm with the Manx GP motorcycles on display at the Velocette MCC Clubrooms, 74 Drayton Street, Bowden. You’d be mad to miss it! 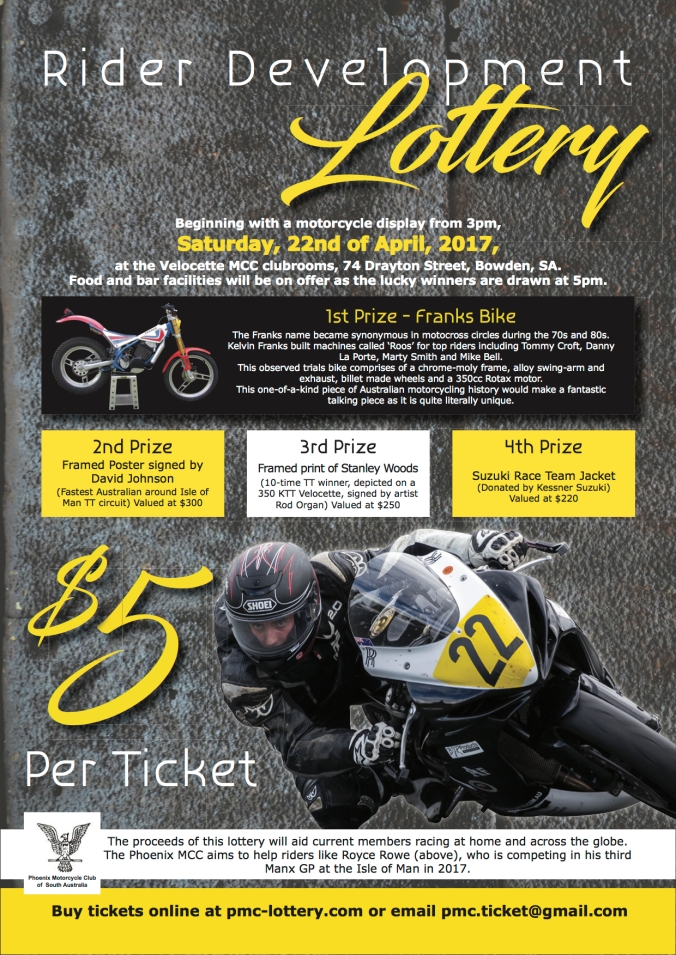