The team had hoped to compete in a 3-Hour endurance race at Mount Gambier a couple of weeks ago but unfortunately the event was cancelled. It still provided us with some extra practice to continue our tuning of the Triumph.

Over the first weekend of November however, we were back ready to race at Tailem Bend for the final round of the State Championships.

Although spring has thrown up some inclement weather, we were lucky enough to score a warm weekend, with temperatures hitting 30 degrees in the paddock and 42 degrees on track.

The Ducati ran well as always, with Royce winning the Twin Cylinder class and setting a new lap record for that class to boot. As riders become more accustomed to the new track, we can expect to see it drop even further, which makes the racing all that much more exciting! 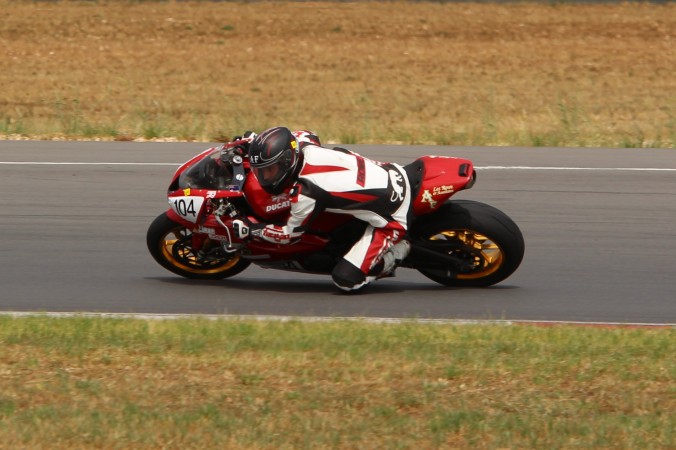 PIC: The Ducati was on-song as always (Credit: Deb Lock)

Looking at us from the opposite side of the pit shed, the team was happy to acknowledge that the Triumph has come a long way with development. We’re happy with its current form, but we’re still keen to try more ideas to see if there can be further improvements made.

We tried some variations with its geometry this weekend and it paid off, with Royce improving his PB by two seconds.

The Supersport class saw some great racing, with Royce taking third and at the same time winning the BEARS Formula 2 class, which was run concurrently.

We were treated to a great battle between Royce on the Triumph and Evan Byles on his 600 Kawasaki – Royce just edging out Evan after they swapped position 12 times over the eight lap race.

That was the final race meeting for the year but we have a few more test sessions planned before Christmas, and then will strip down the Triumph for inspection over the summer while Royce has some more metal removed.

Relaxing after race day with a warm Bonox, Royce yelled out from his Radox bath:

“Being back at The Bend with a few more adjustments to the Triumph, I was feeling a lot more comfortable and had noticed my fitness improving each time I get in the saddle.

“With new PBs on both bikes, and some real tight racing on the Triumph with Evan Byles, I had some great fun and learnt a lot more about the track.

“My first season back on the bike since the crash is now done and dusted! I’d like to thank all my family, friends and sponsors for supporting me and not putting up too much of a protest with me getting back on the bike with everything I put you all through last year.

“Thanks to Dad and Brian for the countless hours in the shed and at the race track working on the bike. I’d also like to thank Mum and Beth for the support and Leonard for writing the captivating, Walkley Award-deserving blogs. I can’t wait for what next year has in store for us!”

The wider team hope’s everyone has a great break and we’ll be keeping you updated with any developments as they occur over the summer.

2 thoughts on “Season ends on high note for team RR”