The first Manx GP practice has been run with pleasing results. After more waiting time than we would have liked, the newcomers were first to leave the start line in small groups led by TT stalwarts. Although controlled, the speed was still only a fraction slower than race pace. 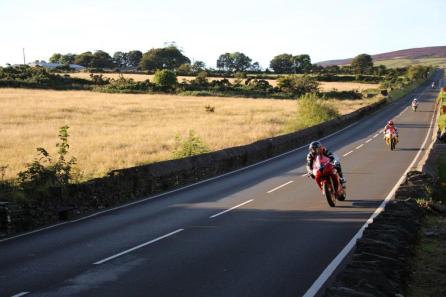 Pic: Royce launching into the Hillberry sweeper for the first time.

After years of anticipation, Royce utilised his pedantic study of the track to clock in a 94 mph lap on his first open ride after the control lap. Although only being early days, the team has high hopes for his first GP attempt. He had this to say:

“In the pits there were hundreds of bikes before I went out. I had an army of butterflies in my stomach. After a quick nervous wee, I was ready to go and we were out. Flying down Bray Hill I had the biggest smile on my face and then over Ballaugh Bridge I laughed with giddy joy. The bumps were a bit horrific, but I found to just hold on and ride them out. The Ducati felt great with good pull out of the tight corners. We need to work on the gearing a bit but that will come when I get a bit faster! I found myself peeking my head through corners a bit while trying to find out exactly where on the track I was, as many corners look very similar. I still have lots to learn. I can’t wait until I’m out next, though!”

Royce was also lucky enough to score an interview with Manx Radio, the live local station which covers the TT and Manx GP with full coverage of the racing. For fans back in Australia brave enough to stay up through the night, visit http://www.manxradio.com/radioplayer/ for live coverage. We will update the blog with racing times later this week so everyone can follow online. 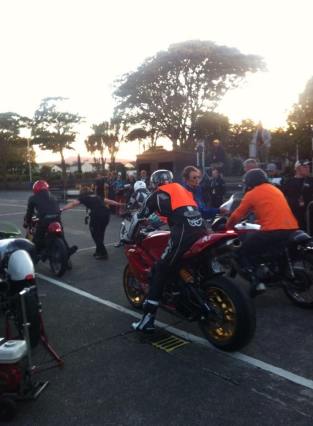 Pic: Royce next off the start line.

For more info on the race itself, plus actual results after the racing, visit http://www.manxgrandprix.org/ for all the updates on not only our race, but the Classic and Junior/Senior GP racing. The Aussie contingent will be cheering hard from here on… 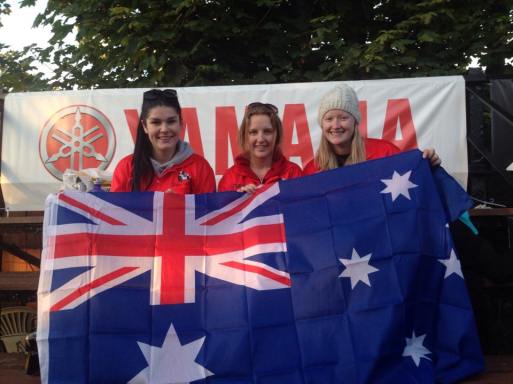