The Rowe Racing team is now ready and waiting for tomorrow’s race after another successful practice tonight. The morning got off to another tedious start after the marshal communication system broke down, taking until 1pm to fix. This resulted in the scheduled 10.30am 350cc Classic TT race to be pushed back to a 2pm start, with Royce’s practice therefore moved back a few hours to 7.15pm.

While anxiously waiting as the sun shone through the cottages, a call came through from fellow Adelaidian John Chiodi informing the team our name had been called to report to technical inspection immediately. Presuming more bad news, the team rushed to pack the bike and tore down to the paddock. Emerging with smiles, the team had actually been notified that the perpetual “Best Presented Bike” trophy had been won by the Rowe Racing Team.

The trophy is given in the opinion of the technical offcials, with the head scrutineer remarking that he wished all teams would be as prepared and well-presented as us – a testament to Brian Rosser and his immaculate Ducati. This award takes every team within the meeting into account – over 400 entrants, including other impeccable classic motorcycles bred just for this two week venture.

Pic: The other half of the Rowe Racing Team
Setting out on a two lap venture, Royce reaffirmed his strong position in the Newcomers class by finishing third fastest with a 101.5 mph lap – finally breaking the 100 mph barrier from a standing start. This confirms the idea that Royce will hopefully be on par with the front-runners in his race tomorrow. 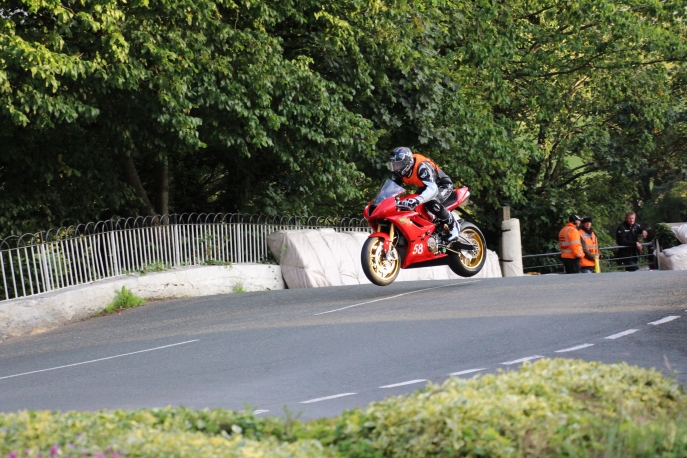 Pic: Royce launching over Ballaugh Bridge
The team is now prepped and ready for the Newcomers race tomorrow afternoon at 2pm IOM time (10.30pm Adelaide time). For those playing along at home, listen to the race live by visiting http://www.manxradio.com/on-air/vauxhall-radio-tt/ for live commentary. It may be a late night, but hey, you did it for the ashes and this time we might actually see an Aussie team who beat the poms!

5 thoughts on “A pleasant surprise and milestone reached”