Our time at the Isle of Man has come to an end in exciting fashion. After having the Supertwin race moved to Friday, the Rowe Racing Team had a whole extra day to prepare the machine for a grueling four lap race. With an overall time of one hour, 25 minutes and 44 seconds, Royce rode the equivalent of just over 105 laps of Mallala, our home circuit. Royce secured tenth position out of 55 starters (only 37 finished), but most importantly completed the race safely. It was easily the best birthday present his mum Debbie could have received seeing him pull around the final corner for the last time!

Pic: Royce turning the last corner for the last time

Taking off from number 55, Royce had a fair bit of slower traffic to make his way past, which can be a difficult task on these small and dangerous roads. From the standing start, he first clocked a 105 mph lap, reaching his previously set goal instantly. Second time around on a flying lap, he recorded a 107 mph time. Pulling through for a frantic 40-second pit stop, the teams’ fortnight of hard work had come into fruition as Royce got away without a hitch. 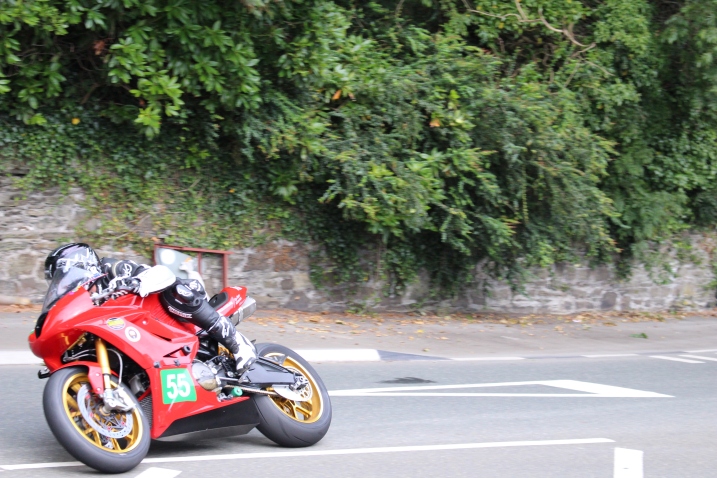 Unlike the Newcomers race, a pit stop is mandatory, thus making it more of a level playing field. Returning from his third lap, Royce chimed in at 102 mph, a very respectable lap considering the pit stop seconds are included. Crossing the line at pace to begin his final lap, Royce dug deep knowing it will be his last chance to shine around the mountain course for at least a year. All the training and hard work had come down to these two days of racing. Piecing the track together seamlessly, Royce crossed the line one final time with the average speed of 108.4 mph.

Pic: A hay bail separating Royce and a phone box – only at the Isle of Man

Securing tenth place is miles beyond what we thought could be achievable before beginning this campaign against guys that live and breath road racing. To have come all this way and record such an impressive result is unbelievable and would have never been possible without the hard work of a lot of people. We’ll have a wrap up on the website in the coming days to really show our appreciation to all the people that have helped along the way.

In regards to the day itself, Royce had this to say:
“Before we started the race I said to the team, “I’m gonna be happy if I get to the 105 mph lap and a top 10 finish.” After a 108.4 mph lap and tenth position finish I was ecstatic and so was the team. The pit stop in the four lap race was seamless, but we could have saved at least three seconds from a quick-release fuel cap. Annoyingly, this would have gained me ninth position as the rider ahead of me finished a quarter of a second faster than me. But, it’s all a massive learning curve. Brian has already begun figuring out how we’re gonna go faster next year. When asked if I want to come back next year I easily replied, “I’ve been bitten by the bug, I want to come back here every year, even til I’m parking my walking frame in the pit garage!”

Pic: Congratulatory champagne after the race

From here, the bikes will be crated up, along with all the spares, race gear and tools, then shipped by boat back to Australia – hopefully taking around two or three months. Much of the team will be heading straight back to Oz, while a few others, including Royce, will be heading off on another adventure around Europe. It’s been an eye-opening two weeks of racing and we are stoked so many people have shown a keen interest in the venture. Now, it’s time to let our hair down before getting serious about contesting the race next year…