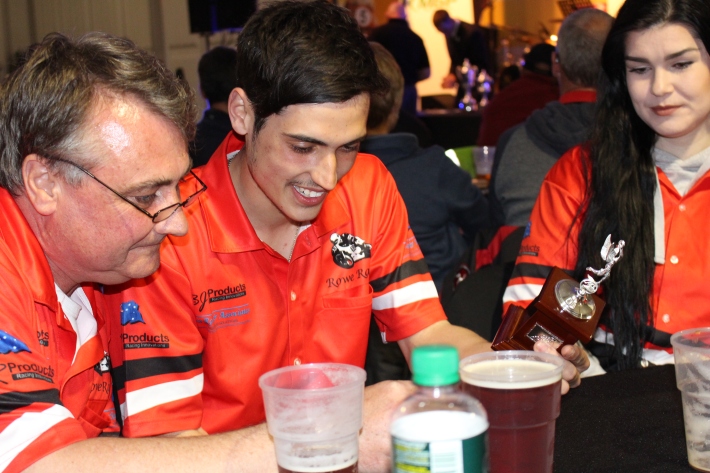 The Newcomers presentation night held by the Manx Grand Prix Club was an affair to remember. Over 200 people filled the VIP tent in Nobles Park, next to the pits, to cheer on every newcomer who had tackled the mountain course.

Pic: The Aussie crew came out in numbers at presentation night

With drinks flowing and great laughs being had by all, we were then reminded of the grim reality that sometimes comes with this genre of racing, as we paid tribute to fallen newcomer Dennis Hoffer. A moments silence was adhered to before beginning the presentation ceremony.

All riders completing the race in the three categories received a finishers medal, whereas anyone finishing within 110% of the fastest lap received a replica trophy of the actual, much larger, TT trophy – the fantastic achievement Royce was able to obtain. Also, the tradition of carrying the winner down to the stage in a sleigh-type contraption was a new sight for the overseas visitors.

Pic: The long running tradition of race winners being chaired down to the podium

Everyone was extremely impressed by the effort the racing club had gone to to put on such a great event. We could have partied on into the night with the live band and well-stocked bar, but there is still work to be done before Friday’s final Supertwins race. Tune into Manx radio at 6.45pm Friday night Adelaide time (10.15am IoM time) to hear the race live.

One thought on “Rowe Racing recognised”