The unpredictable island weather has gotten the better of us again, with today’s Supertwins race being postponed until Friday. With a vintage rally taking place tomorrow, the track has been booked and we have no other choice to wait until Friday morning. Although we’ve been told it will be subject to change, at this point in time the race will take place at 10.15am Friday morning (6.45pm Adelaide time). 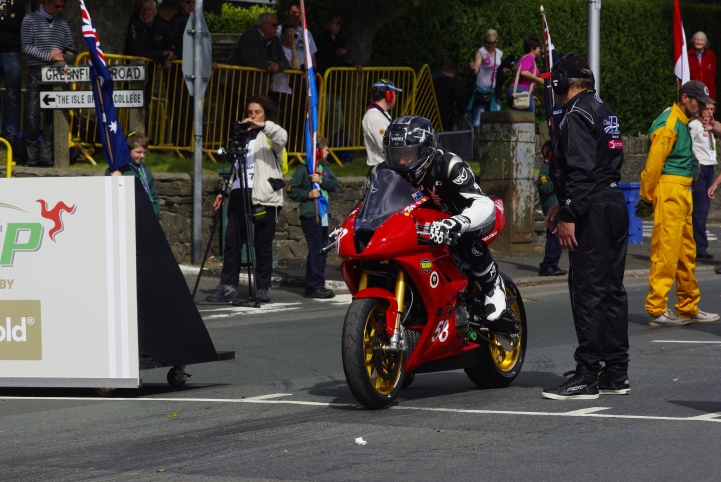 Even with the event cancelled, Royce was still allowed out this afternoon for a two lap practice session. Surprisingly, the weather was breezy, but fine. Clocking in his first time around from a standing start, Royce posted a 104 mph lap – potentially a good omen as 104 is his Australian racing number. Continuing through on his final lap, Royce crossed the line with a 104.995 mph time, agonisingly close to his 105 mph target. This final lap time slotted Royce in as eighth fastest out of the 55 Supertwins racers.
Unlike a normal qualifying arrangement with a grid of riders in fastest order, the staggered time trial start of 10-second intervals in numbered order will unfortunately see Royce released last as he is number 55 – potentially needing him to weed through some heavy traffic. With this and the weather being out of the team’s control, everyone was thrilled with his progress. The team now has a full day to prepare the bike which will be up against some serious competition. As much as we would have liked to race and begin packing the crates up for the long trip home, any extra experience around the track is a big plus in Royce’s book.

Tune in Friday to hear Royce contest the Supertwins race at 10.15am our time (6.45pm Adelaide time) with the same broadcaster  http://www.manxradio.com/on-air/vauxhall-radio-tt/ .

Pic: Royce on the final corner on a hot lap