With rain and fog forecast, tonight’s practice session looked doubtful. Huddled around the radio at 4pm, the team heard the delayed news at 5pm that practice would in fact go ahead. The more laps the better for Royce, and especially Paul our newcomer, so it was welcomed news.

PIC: Royce making the most of the early clear lap on his Suzuki GSX-R600
The day itself started off with a bang, opening the morning paper to find a write-up about the Rowe Racing Team by local sports journo John Watterson. He was an extremely lovely man who came to visit our makeshift workshop a few days earlier, having a lengthy chat to the team and reminiscing with Les about TTs past. If you’re reading from Oz, it’s unlikely your local newsagent would stock the Isle of Man Examiner, so this picture of the paper and a freshly brewed Manx coffee will have to do! Don’t worry, we’ll be bringing plenty of copies home with us. 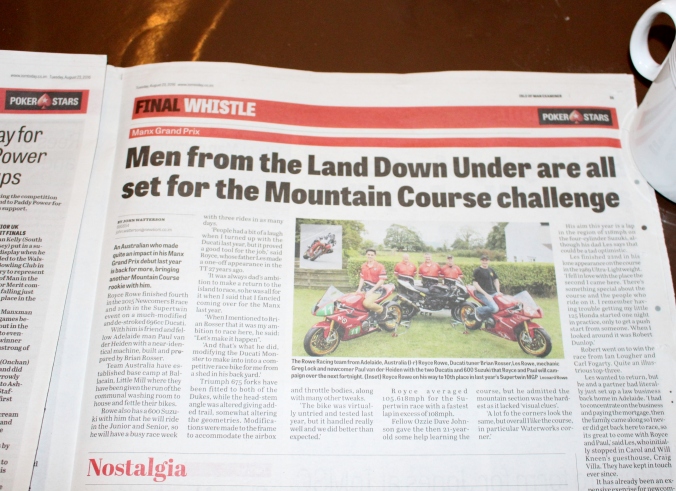 PIC: We made the local paper!
The day itself was spent changing oil and trying to diagnose the Suzuki’s issues. We took the 600 to the guys at EvoMoto in Ramsey to dyno the machine, hoping to diagnose the problem. Unfortunately, as Murphy’s Law goes, it ran perfectly and showed no signs of the power troubles it had given Royce heading up the mountain. With suspicions pointing to a clogged fuel filter, the team has now swapped to the spare tank, hoping this may eradicate the problem.

PIC: Royce tipping in to Hillberry corner
When the time came to head out, the Suzuki performed well with no issues, so the problems are at bay for now. The first lap posted was 109.1mph, before fog started to settle on the mountain the second time around, forcing the session to be abandoned. All wasn’t lost though, as the yellow flags came out two-time TT winner Gary Johnson passed Royce, tapped his behind signalling for Royce to follow and led him back to the Start-Finish line – some valuable lines and knowledge was gained. Having the same trouble of needing to jump straight from the 600 to the Ducati, Royce was lucky to score a quick breather as the officials held up the Supertwin practice for 10 minutes while the fog rolled back down the hill. Setting out in damp conditions, Royce squeezed just the single lap in of 104.4mph. The top 10 Supertwin riders are only separated by 3mph, so we’re hoping for some exciting racing ahead in the pocket rocket class. 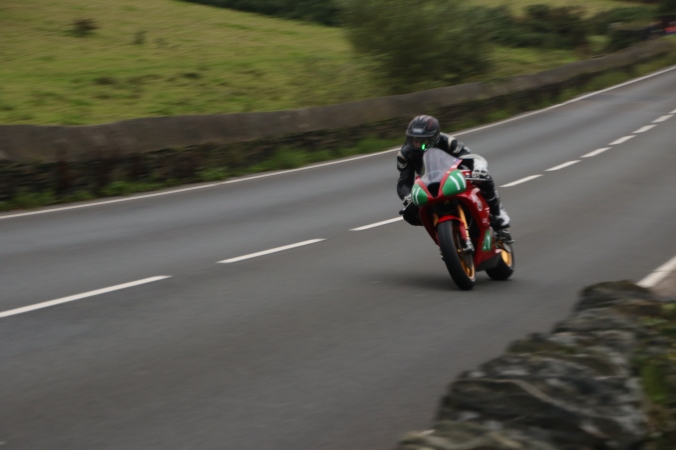 PIC: Royce getting back into the groove on the 650 Ducati
Tomorrow looks to be a fine day, with only some small cloud. Unfortunately the Classic bikes have control on Thursday, which will be a much needed day of rest for the team before Friday practice which looks to actually be a rather hot day – in English summer terms.

One thought on “Tuesday practice goes ahead”