After a late night from the initial shock of Royce’s off, the team has gathered their thoughts and assessed the damage. Apart from a bruised knee and general soreness, Royce has pulled up alright. A good night’s sleep and day on the couch has served him well, with plans to jump back on the bike (Suzuki 600 for the Junior/Senior practice) tomorrow he’ll need all the rest he can get. 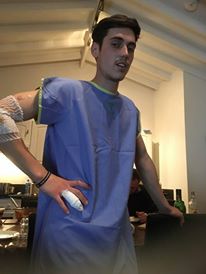 PIC: We’re not sure to be worried, but Royce refused to take the dress off for hours…

The bike, on the other hand, is a bit worse off than first expected. Although being laid down on the right-hand side, the rear-wheel has hit the gutter with an impact of extreme force. This has buckled through the rear suspension, basically crumpling everything that is connected at the tail of the bike. The rear rim itself hasn’t bent, which is a testament to Carrozzeria rims. The rear axle and ‘bars are broken, but easily replaceable. Unfortunately the frame has cracked in half, which has been the most difficult part to source.

PIC: Some major surgery is needed on the Duc

So, the plan of attack? Hit the ground running with the help of some great people. Royce’s leathers had numerous holes and tears, so local friend Jamie, who has helped us with bits and pieces in the past, put the call out for a sewing whiz. Moments later we were on the way to the village of Peel to meet Christine, a leather specialist. Dropping everything to help us, we were told to kill time for an hour or so, which was filled in by fish ‘n’ chips by the seaside. The leathers were patched up to perfection. We couldn’t be more grateful of Christine’s work.

PIC: The whole left side copped a battering

.
Next was trying to source the parts needed to repair the wounded Duc. Just to test us, Monday is a bank holiday in the UK, making it basically impossible to get the parts required freighted over to the Island. Unfortunately, the Island itself hasn’t got a wreckers with the bits needed. Fortunately, team members Deb and Greg Lock have a friend in the North of England who was willing to drive four hours to Hull in order to pick the frame and other parts up, before then shooting over to Liverpool to catch the 3am ferry to the Isle of Man, delivering our desired parts by 7am tomorrow morning. What a woman! We can’t thank Ali enough for going so far out of her way to help the team keep the dream alive. We’ll have a Manx kipper roll and luke-warm O’Kells Bitter waiting for her on arrival.

.
We’ll be placing (literally) Royce on the Suzuki tomorrow, but it’s unlikely the Rowe Racing Manx 650 Ducati will be ready to ride. With all things going to plan, provided head honcho Brian Rosser and mechanic Greg Lock don’t pass out from exhaustion, we will have the Duke back up and running by Saturday practice. This then gives Royce the chance to make up the needed amount of laps to qualify for the Supertwins race.

Amongst all the madness, team rider Paul has been continually impressive aboard his Ducati 650, leading the Newcomers B group with a 106mph lap. Brian and Locky have still needed to remain sharp with Paul’s bike, so you can imagine the weary heads around the dinner table… at 9pm after 7pm practice has concluded. 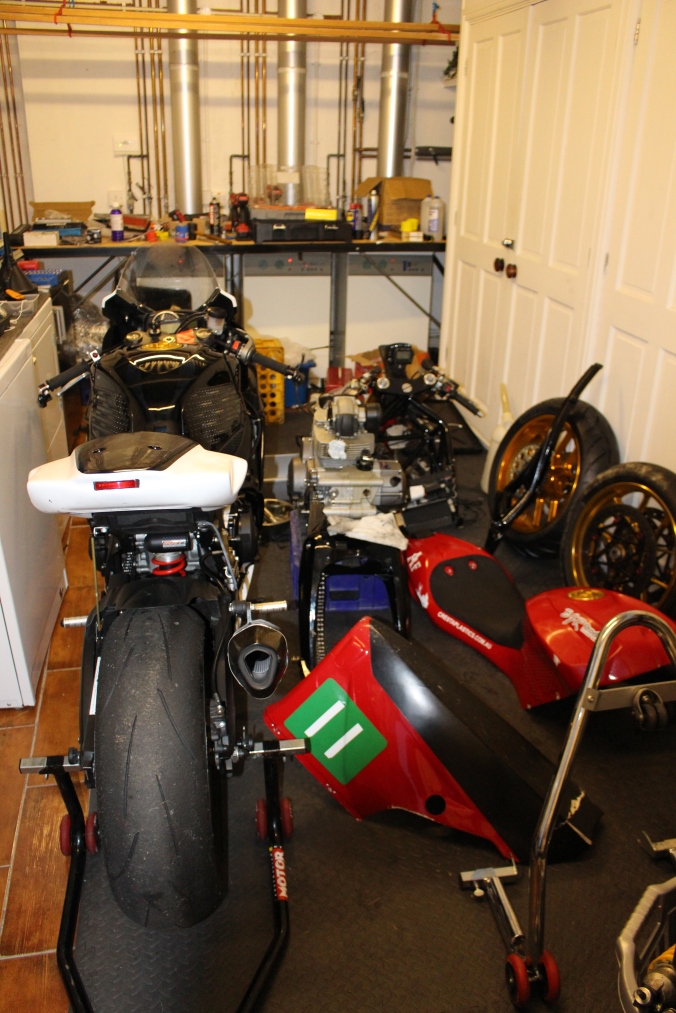 With an injured body, Royce got the rare chance to stand on the other side of the fence to watch the bikes tonight. We all revisited The Nook with him to check the dodgy spot and thank the marshalls for looking after him. After waiting for a solid hour, we were told a bike had fallen and caught fire, setting the road alight too. This caused enough damage to warrant road repairs, so coupled with fog rolling down the hills it was enough for the Clerk of Course to call the night off. So our team rider Paul was left hanging at the line and Royce never got to see a bike from the spectators point of view.

Check back tomorrow for how a bruised but not beaten Royce fairs on the Suzuki, as well as updates on the extensive Ducati repairs.

4 thoughts on “Getting back on the bike”