As previously mentioned, the Ducati returned from it’s first lap out after crash repairs with an odd rattle. Running a few tests pointed towards a broken bearing inside the engine. Without actually knowing exactly where or what, the team opted to perform major surgery – pulling the damaged engine out and bolting the new one in. We also didn’t know if the impact from the crash had loosened or damaged other parts we aren’t aware of yet, so the fresh engine was definitely the safest option. 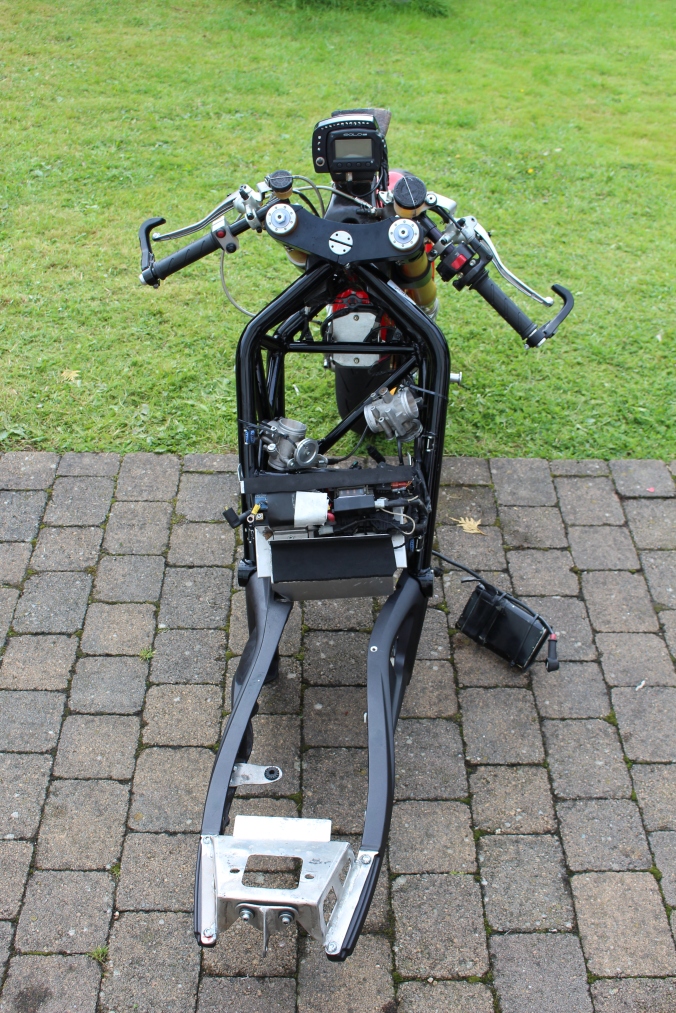 Mechanics Brian and Locky have spent the majority of the day performing the procedure, slipping out in the afternoon to checkout the Jerby Festival of Speed. The guys will more than likely be working on into the night trying to iron out any of the smaller issues with the fresh metal. With all this focus on the Ducati, it has taken some emphasis off the Suzuki for the Junior/Senior races. Royce was placing about tenth in the Junior practice, so as long as he focuses on both there may still be another reason to congratulate the team.

PIC: Prepping the donor for surgery

We’re hoping to get the bike out for a test to run in the engine, but that may prove to be difficult. Unfortunately, the Jerby road circuit is closed, as that would have been perfect for this scenario. We’ll just have to find an alternative or be forced to use the last practice tomorrow afternoon to let Royce slowly run the bike in. The organisers are very understanding here, even allowing competitors to ride their race machines on public roads an hour before or after their event to make getting home easier. Plus, basically anything with a motor is road register-able here – spotting blokes popping down the shops on their dirt-track sidecars has been a laugh. We love it, but can’t imagine the fun police back home would consider adopting the laws.

PIC: The team trying to find the rattle once Royce had returned from his initial lap

So, all things going to plan (ha!), we’ll have the bike back up and running by tonight, run in tomorrow and practicing tomorrow night, ready for race day Wednesday… Check back in the coming days to hear how it all actually pans out. Let’s just say we’re all hoping for a bit of Irish luck!

One thought on “The Duc’s guts are off”