After a stressful weekend sourcing parts, replacing engines and Royce repairing wounds, things are finally starting to look up.

PIC: Royce off to the back nine before jumping on the bike later
.
This morning the team took Royce out past Hillberry, the closest part of the track to our accommodation, then up to Kate’s Cottage in the van with the Ducati. The engine went in overnight without too much fuss. The only trouble was with a timing gear that wasn’t quite right, promptly sorted out by spanner-men Brian and Locky. So to run it in, Royce was let loose at the drop point past Kate’s Cottage. As mentioned in yesterday’s blog, a rider can take his machine to and from the Grandstand an hour before or after the event, so although it may not have been the ‘direct’ route, we headed towards Douglas from there. 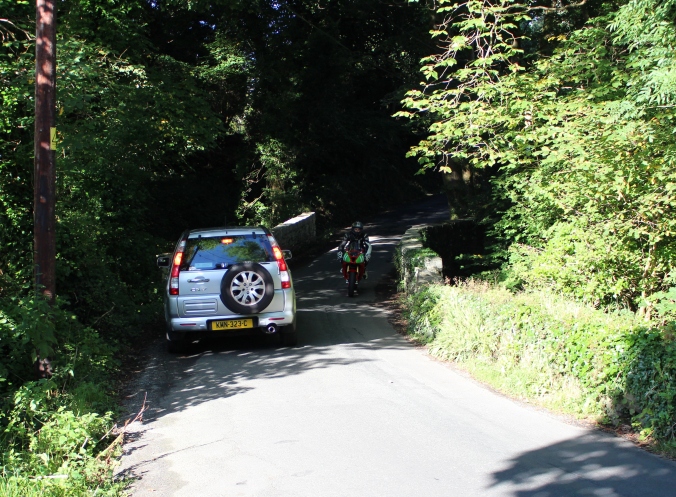 PIC: Give way to horses and passing race bikes
.
Royce thundered past police and the general public in their hatchbacks with nobody as much as batting an eyelid. Being a race engine, just this short distance was extremely beneficial as the only Isle of Man road track was closed today. The team then made their way to the paddock for 12.10pm practice. Only planning to complete the one lap at half-pace, Royce set out taking the bike to basically half-throttle. By half-way through the lap, Royce was feeling the engine slowly loosen up and the connecting parts bed-in nicely. Pitting straight afterwards, Royce still managed to clock a 108mph lap. The other top riders were around the same mark and also only completed the one lap – obviously everyone had the same idea of saving their engines for the big race this Wednesday.

PIC: Royce passing over Braddan Bridge during his practice
.
In other exciting news, our fellow Rowe Racing Team rider Paul van der Heiden competed in his Newcomer B race tonight at 5pm. Knowing he would be around the mark we had our hopes set high, but Paul went one better and crossed the chequered flag to win his race by just over 10 seconds! Paul had no idea he had actually scored the win when returning to the pits, such is the nature of time trial racing. Ecstatically jumping on the podium, the team were down below in pit lane to wear the dregs of champagne. Although over the moon, both Paul and Royce move their attention to Wednesday’s Supertwin race. And before that, Royce has to consider his attempt at the Junior aboard the Suzuki 600. 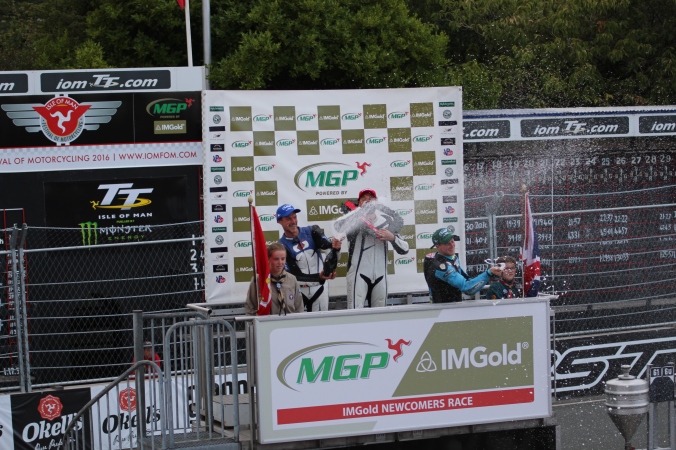 PIC: Our man Paul van der Heiden celebrating his first place finish
.
Tomorrow is a day off with no racing scheduled. The Classics had their final race today, so only Manx GP races are scheduled for Wednesday and Friday. This means more room for the team to watch and the ‘1964 TT / Old Guys Rule t-shirts’ ratio has suddenly dropped. We’ll be spending tomorrow giving all three bikes a final service before Wednesday’s races. Tomorrow night, rider Royce and media-man Leonard will be visiting the Governor’s House to meet the notables of Isle of Man society. It should be a great opportunity to spruik the team’s efforts in coming over to the Isle and promoting the festival back home.

7 thoughts on “Things are coming up Rowe-house”