Waking to a much nicer day, the team had time to fettle with the two race bikes before heading down to the start line. Although setting off to a sunny horizon, by the time riders met the mountain a layer of fog they call ‘Manannan’s Cloak’ had covered the area.

PIC: Brian ‘Man with a Van’ Rosser and co unpack the goodies

.
Royce’s second session was on the Ducati and by half way through the second lap, more mist had rolled onto the mountain and visibility was reduced dramatically. Royce managed a 110.8mph lap on the Ducati, being sixth in the standings. First fastest lapped at 112.1mph and eighth at 110.3 mph, so it is a very competitive class, which should make for some exciting racing come next week.

The team are still having handling problems with the Triumph but we are heading in the right direction as the changes made last night have been an improvement.

PIC: There’s not much time to check out the scenery… (Credit: Tracey’s Pictures)

.
All competitors are improving as practice comes to a close this week. The field will get one final practice next Monday evening before racing begins on Wednesday.

The lap time on the Triumph increased to 116.5mph, being sixth in the Junior and fifth in the Senior qualifying positions. The fastest qualifier in both classes recorded a lap time of 117.5 mph, so these classes are closely contested as well.

PIC: Leaning the Green Machine over full-tilt around the course took its toll on Royce’s body (Credit: Nick Wheeler)

Once clambering off the bike with sore hands and bottom, Royce exhaustedly said, “With trying to hang on to the Triumph over bumps and jumps in the previous two sessions becoming an issue, we have adjusted the seat and put padding down – allowing me to pilot the bike easier. Good conditions on the road today meant I had the confidence to test different lines through corners. Alas, the conditions weren’t great the whole way around. The thick fog over the mountain hindered my lap times a little and I therefore didn’t get the chance to try new lines on that section, which is where I need to find time the most. The Duke is behaving itself really well and I can’t wait to get back out there! No ice bath tonight, one was enough!” 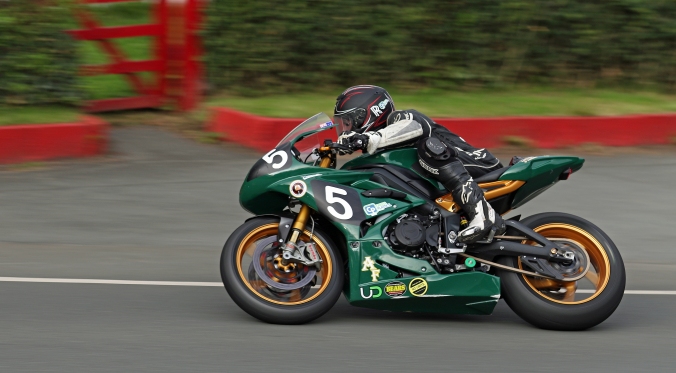