With the team prepped and Royce both mentally and physically ready to compete in first practice, it was a bit disappointing to have the news come through that Saturday and then Sunday practice were to be cancelled.

It was fine and sunny in Douglas but heavy rain fell between Glen Vine and Ramsey so we couldn’t get out on the Saturday.

This is a bit stressful as we get ready to go then have to ramp everything down, get ready again and yet again stand down.

Sunday was unfortunately cancelled due to a lack of marshals and impending poor weather. Given the track is so big, it’s a huge logistical ask to get people out across the whole island.

To try and help out the cause, a few of our very own support crew went out to help marshal. The girls were posted at Keppel Gate. In the early days the first rider who reached Keppel Gate had to stop and open it and the last rider through had to stop and close it.

PIC: The girls doing their bit as volunteer marshals.

Clerk of Course, Gary Thompson said, “What I don’t want to do is close the road, get everyone in place, have everyone waiting and then find we can’t hold the qualifying session, so we have decided to give everyone plenty of notice and cancel today’s session and concentrate on getting marshal numbers in place for Monday night.” 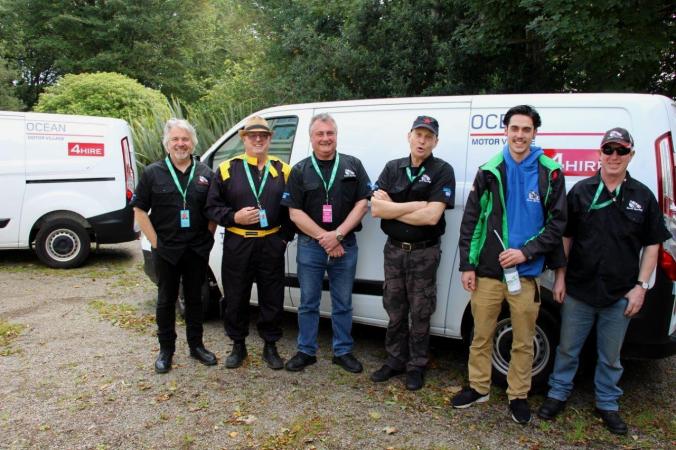 PIC: We hire our vans from ‘4 Hire’, who look after us each year and do a great job.

So, with weather permitting, the roads will now close at 6pm on Monday night (2am Tuesday AEST) for the first qualifying session, which is due to get underway at 6.20pm. This will be for Royce aboard the Triumph in the MGP Senior/Juniors, followed by the Ducati in the MGP Lightweights/Ultra Lightweights class scheduled to go out at 7.15pm.

PIC: Before heading off to the track we gave the bikes a quick test on the road outside our accommodation, Ballacain Cottage.

With some spare time, the crew have been catching up with old friends from past Manx Grand Prix events. The team also have enjoyed some hearty pub meals and great cultural events.

PIC: There are a number of wild wallabies on the Island, mainly up on the mountain. A few escaped from a wildlife park a few years ago and have multiplied, and there is currently a wallaby festival going on all around the island, with statues and exhibitions all over the place.